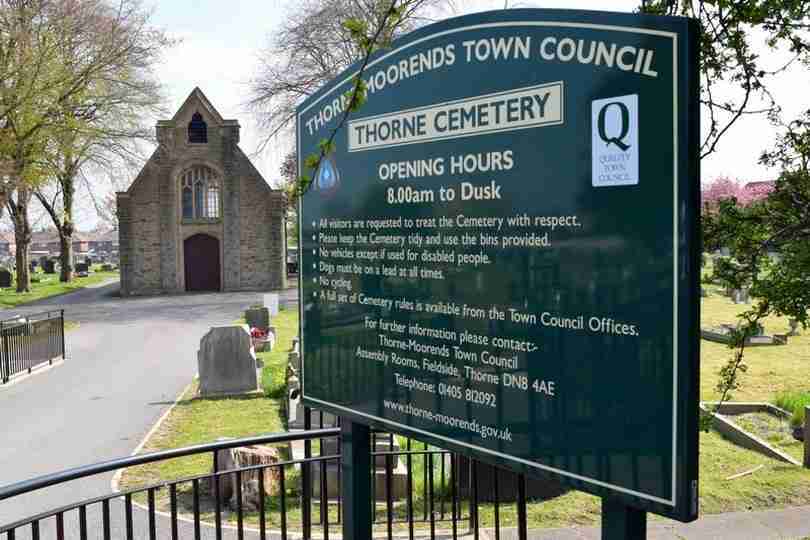 Local cemeteries have been re-opened following further guidance to councils from Government in relation to measures taken during the coronavirus pandemic.

A letter has been sent from Government to local authorities today (Thurs 23 April) which highlights updated guidance on burial grounds and cemeteries.

On March 24th, following a public address by Prime Minister Boris Johnson, Thorne Moorends Town Council announced that Thorne Cemetery was to be closed to the public except for funerals. On April 3rd, a spokesperson for the Town Council clarified that closure of the cemetery was in “direct response to government legislation which places a requirement on cemetery and crematoria managers to close the sites to the public other than for funerals.”

Following remarks made by Secretary of State Robert Jenrick MP in a Government daily press briefing on Saturday 18 April, Thorne Moorends Town Council announced on social media that Thorne Cemetery would be re-opened from Tuesday 21 April. A spokesperson for the Town Council said this was in response to “the most recent Government guidance”.

In a letter to local authorities dated today (Thurs 23 April) regarding continued access to parks and public spaces – including burial grounds and cemeteries – the Minister of State for Regional Growth and Local Government, Simon Clarke MP, stated: “As the Secretary of State has said, during this difficult time, it is only right that families have an opportunity to pay their respects to loved ones who have lost their lives.

“In light of this, the closures guidance will be updated to make clear that burial grounds and cemeteries may remain open, and that grounds surrounding crematoria may also remain open, including gardens of remembrance.”

When announcing the reopening of Thorne Cemetery, Thorne Moorends Town Council said it had considered “enhanced safety measures to help protect both visitors and staff”, saying that “social distancing must be applied at all times” and asked that visitors “refrain from touching gates, railings, bins, taps, and headstones whilst visiting the cemetery”. The spokesperson for the council also asked that visitors do not approach cemetery staff, adding: “All enquiries relating to the cemetery should be made to our office on 01405 818015 or clerk@thorne-moorends.gov.uk“.

Opening hours for Thorne Cemetery are now as follows: Monday to Friday – 3.00pm to 9.00pm; Saturday and Sunday – 9.00am to 9.00pm. The council has stated that no public access will be available during a funeral.

The council spokesperson continued: “Our primary objective is to ensure our staff remain healthy and able to provide burial services as they arise”, adding “We thank you for your kind co-operation during these challenging times.”

Funerals will continue to be conducted in line with guidance from Public Health England.