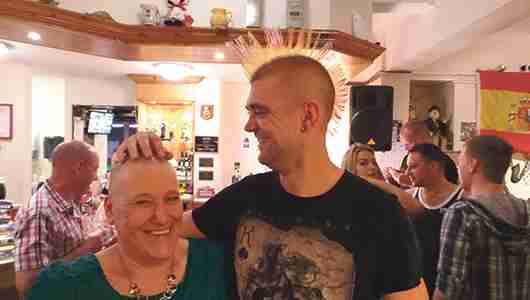 Hair raiser of a charity night

What a great turn out for the local charity event held at the Blue Bell Inn, Hatfield on Tuesday 27th August. The event was in aid of Epilepsy Action and Cancer research UK.

Delia Prudence the landlady had wanted to do something to raise money and awareness for Epilepsy Action after living with the illness since she was 23.

Cancer is also close to home for Delia who was diagnosed with the disease when she was 40 and has since made a full recovery.

She said on the night “after the fantastic care I’ve received, I have been able to lead a normal life and want other sufferers to know they can too”.

The evening had a Spanish theme with “The famous amigos” playing and paella being served.  A great night was had by all with everybody up dancing.

After a little Dutch courage, Delia finally got round to what we had all been waiting for and allowed her Daughter Pip to shave off her hair.  The band played on until the very last lock of hair fell and everybody applauded and cheered the brave landlady.

The grand total raised on the night was a massive £780.00 – a fine achievement by any account.

The event was organised by Delia with the help of Andrew Ramsay, a customer in the pub who recently lost his Mum to cancer. Andrew has also raised £742 for the charities by taking part in the Tough Mudder on 7th September 2013. He managed it in four and a half hours and said “everyone just spurred each other on to keep us all going, it was the hardest thing I have ever done, but the most rewarding, I can’t describe how it felt”.  A grand total of £1,522 was raised which will be split equally with the Cancer Research UK & Epilepsy Action charities.