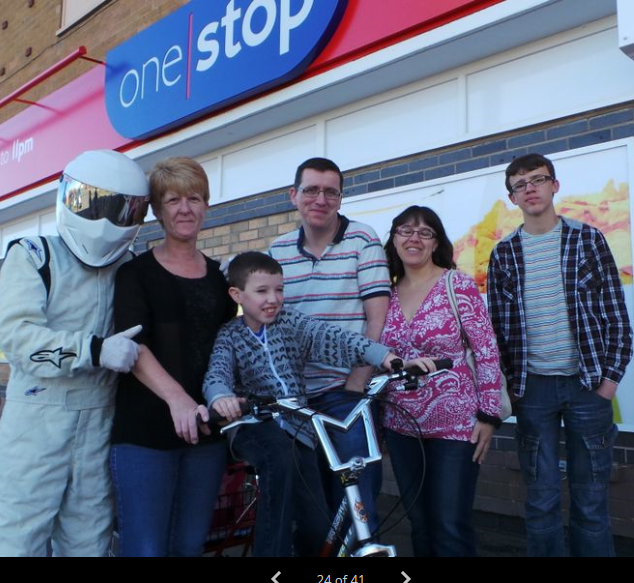 The store manager, staff and customers at Thorne’s One Stop Shop, South Common have rallied together to not only raise £502.76 to purchase a specially adapted bike for 13 year old Jack Allen, but also managed a very special appearance from one of Jack’s favourite TV characters too.

Liz Garth, store manager, told the Thorne Times, “I couldn’t think of a better reason to raise funds than for Jack’s cause”. The youngster suffers from autism and epilepsy so can’t ride a 2 wheel bike due to balance issues with having poor muscle tone in his legs. After Jack’s Dad had shown Liz a video of Jack riding his bike, Liz learned that the bike he was on had been loaned to him on an outing at Sandall Beat  and was surprised to learn that for Jack to have his very own purpose built bike it would cost £500. Liz recalls thinking “…this family are part of our local community and have shopped with us for years; I need to do something for Jack”. Selling raffle tickets to customers in the store, the response was overwhelming with some customers even saying they didn’t want the raffle tickets but just wanted to donate money to help with the cause. Some even asked for cash back on purchases and handed it straight over to the collection.

There was more surprise to come when Jack turned up at his local store to have his surprise bike revealed, when his very own TV Favourite from Top Gear, The Stig, wheeled the shiny new adapted bike around the corner. Jack jumped with joy and went running to greet The Stig to claim his new bike. It wasn’t long before Jack was fully equipped in helmet and fluorescent jacket, raring to try out his new bike – of course with The Stig close by his side.

Liz has asked us to pass on her sincere thanks to everyone who donated and couldn’t express her gratitude for everyone’s generosity enough, including The Stig for giving up his time!