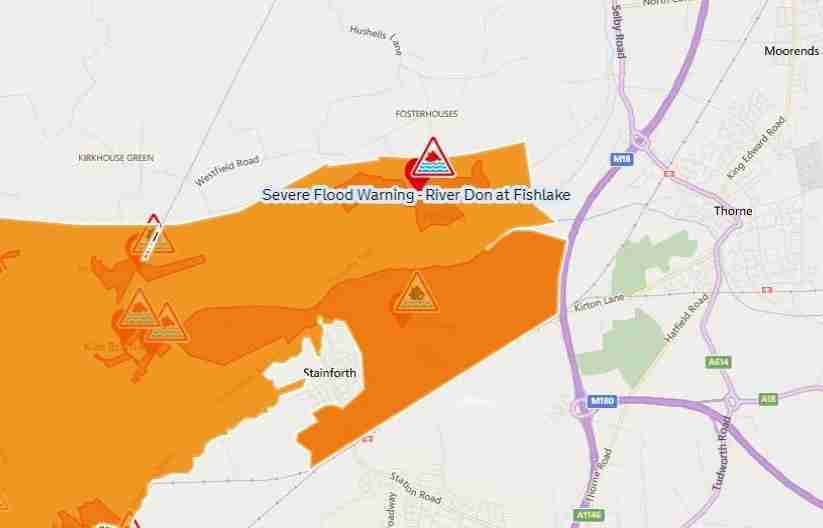 Residents of Fishlake were advised to leave their properties as floodwater levels in the village rose overnight.

The level of the River Don locally has remained high overnight and the flood warning for Fishlake was upgraded to ‘severe’ in the early hours of this morning (Sat 9 Nov).

Homes and businesses in the area have been affected by flooding. Fishlake Cricket & Bowls Club said via their Facebook page this morning that the village was “badly flooded” including their clubhouse. They added: “I know lots of you will be concerned about friends in the village whose homes are affected. Roads into the village are still difficult, impassable in places, possibly only able via Wormley Hill but not confirmed.”

The council added: “Residents in the area are advised to evacuate their property and are being supported to do so. A rest centre at Lakeside is in place for those affected who are unable to stay with friends and family.”

Doncaster Council has set up an emergency helpline and anyone who is in need of support can call them on 01302 735688.

Just before 6.30am, the Government Flood information service said that evacuations were taking place and added: “Our incident response staff are closely monitoring the situation and our incident room is open. Multi agency partners are responding to the situation.”

In Thorne, some properties have been affected by overspill from the Stainforth & Keadby canal. Staniland Marina closed its bar last night as water from the canal flooded the car park and came up through the floor of the bar. The bar is to reopen at lunchtime today following a cleanup.

The Friends of Thorne Community Wood has announced this morning that the wood is closed, saying: “Due to severe flooding in the wood last night, access to the site is prohibited until further notice. Assessments as to the water levels and condition of the ground will continue over the weekend.”

The Canal and River Trust has given notice of a navigation closure on the Stainforth & Keadby canal saying: “Due to rising water levels all sections between Bramwith Lock and Keadby Lock are closed until further notice.”

Moorends Miners Welfare & Community Development Centre has opened up as a ‘donation station’ for people wanting to drop off items to help those affected by the flooding. The centre has asked for items such as bottled water; tinned goods/non-perishable items; coats, blankets, duvets, pillows; tea, coffee and snacks; hand sanitiser; new toothbrushes; baby/face wipes. For further information call the centre on 01405 818299.