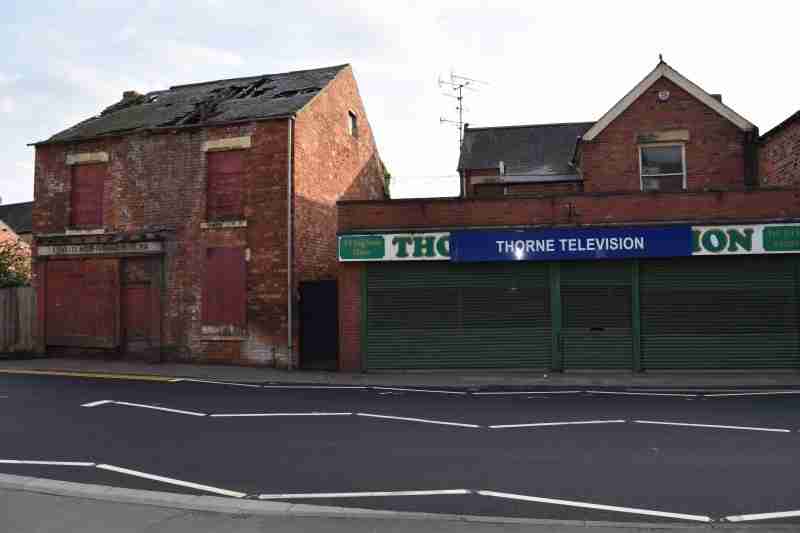 Building Redevelopment Plan Given Go Ahead

An application seeking permission to redevelop an area of King Street in Thorne Town Centre has been passed by Doncaster Council.

Planning permission has been granted for a proposal that would see the demolition of no.1 and no.3 King Street in Thorne. In their place would be a new building providing two commercial units and twelve apartments spread over a mix of two and three storeys.

No.1 King Street, once occupied by Long & Co Motor Engineers, is now derelict; the next door property, No.3 King Street, was home to Thorne Television.

The plans for the proposed new development show two ground floor retail units with frontages that face out onto King Street and a cut through between them leading to 14 parking spaces at the rear of the building. Twelve one-bedroom apartments are then provided across the building’s various floor levels.

In granting the application, the effect of the development on the ‘character and appearance’ of the Thorne conservation area was considered by the planning authority.

Thorne Moorends Town Council, a consultee in the process, said that it ‘welcomed and supported’ the application and asked that the development “be built in a way that is sympathetic to the conservation area in which it sits”.

One representation was received from a member of the public. The resident said the development should be encouraged as it would provide a “positive contribution to the town centre”.

No.1 King Street – the derelict Long & Co Motor Engineers building – was considered by the design and conservation team at Doncaster Council to be of ‘historic interest’.

Doncaster Council’s conservation officer had initially recommended refusal of the proposal but after “extensive revisions and amendments” were made to the plans the objection was removed.

One of the twenty-four conditions attached to the granting of the application is a requirement to set out a strategy for historic building recording and archaeological investigation before work can begin.

South Yorkshire Archaeology Service had said in a consultation reply that it was “quite likely” the area has been in use “since at least the 12th century”, adding that previous archaeological investigations in Thorne have shown that archaeological remains can be preserved beneath some older buildings.

Doncaster Council’s planning delegation report outlined issues including ‘identified deficiencies’ in the amount of outside amenity space and, to a lesser extent, the amount of parking but concluded: “Taken in the round, the positive factors of the proposal, including the development of the key part of the conservation area, outweigh other negative aspects”.

The decision notice for the application was issued on Friday 26 June 2020.