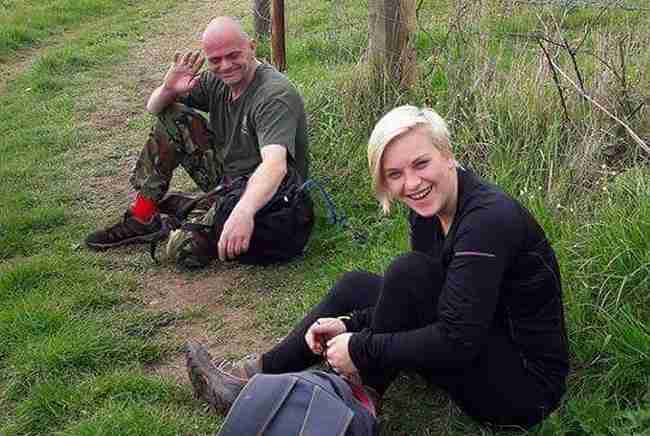 Two fundraisers are set to walk across the country from coast to coast to raise money for local children’s clubs.

Moorends pair Mark Howell and Becky Kirwan will be doing the walk, fundraising for local cause the Cheeky Smiles Fund.

Starting out on Wednesday 23 May, the pair will be walking 150 miles from Blackpool to Whitby which is expected to take around four to five days to complete. They will set off at 10am on Wednesday from Blackpool and walk to Ingleton, sleeping rough on North Yorkshire Moors over night before moving on to the next part.

Mark, a seasoned walker, completed a 110 mile walk with Becky in three days last year and has been doing around 10 miles a day in preparation for this hike.

The pair have already raised £611 online and £600 offline out of their total £2,000 target and all donations will be given to the Cheeky Smiles Fund.

They Cheeky Smiles Fund is a charitable cause set up in order to raise money to support out of school educational and recreational activities, and other enrichments for school children based in Thorne and Moorends.

In 2017 they raised a total of £6,335 for the charity, which was donated to support activities for children in Thorne and Moorends. The money was shared between local sporting groups such as Moorends Hornets and Stingers, Thorne Tigers, Junior Marauders and Thorne Colliery; and organisations such as the local Sea Cadets. Pit Stop after school club at West Road Primary School in Moorends was also given funds.

In 2016 the Cheeky Smiles raised £7,386, sharing it out between all local primary schools in Thorne and Moorends.

Mark cuts the grass for residents around his street in Moorends and money he receives goes straight into the donations. Another Cheeky Smiles member is taking part in Tough Mudder to raise money and another will be doing a 10k run. Cheeky Smiles will also be raising money at Thorne Summer Festival.

Mark continues, “We don’t ask the public for money apart from maybe about once a year, we generate all the money ourselves.”

“I’ll probably complete one big walk a year to keep fundraising, I started five years ago when I ran 45 miles from Snake Pass on my own. We’ll be doing bigger and bigger things each year, I have some ideas for the next one, let’s get this out the way first, but it’ll be something bigger next year definitely.”

They have done some amazing work and their efforts are ever appreciated by local schools, clubs and the children who the money benefits. If you want to support Mark and Becky on their coast to coast walk, you can donate through their Go Fund Me page: www.gofundme.com/5a68z0w