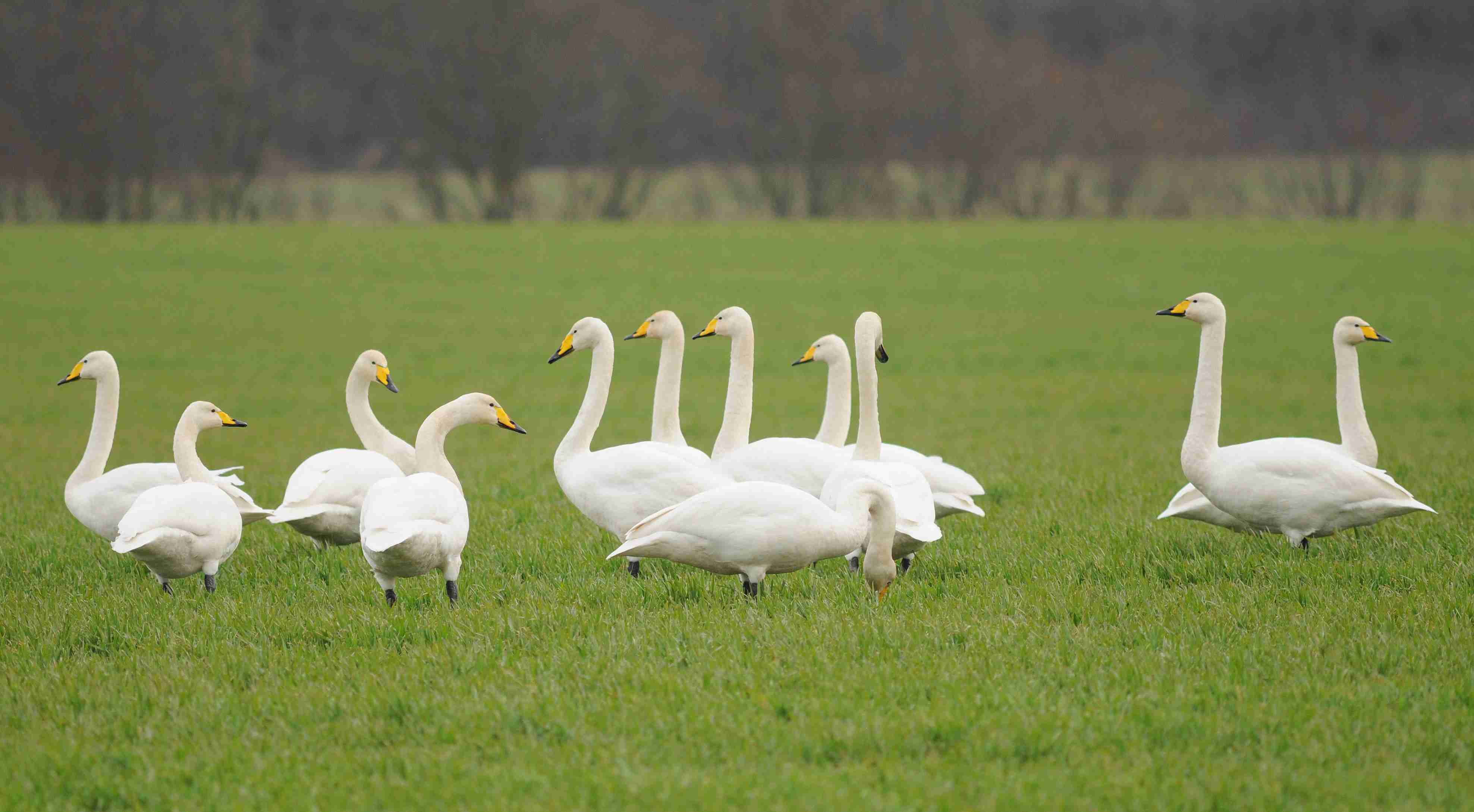 As Autumn fades and we begin to see the onset of winter, flocks of plovers gather on fallow farmland or areas with short sward. Hundreds of golden plover and lapwings and if you’re lucky an occasional grey amongst the flock make for a magical spectacle as they wheel over the low lying fields characteristic of the Humberhead Levels. Skeins of pink-footed geese overhead with their familiar call is another sign that winter is arriving. Only last week I counted 131 birds in a swan herd also grazing fields on the periphery of Hatfield Moors. Other winter visitors also here include fieldfare and redwing, species who spend a warmer winter with us than if they’d remained in Scandanavia where they breed. Waxwings occasionally ‘erupt’ and flocks can often be found devouring the berries from ornamental planting schemes favoured by supermarket landscapers.

Determined naturalists and that hardened breed of walker who love the wildness of our moors might be lucky enough to come across a great grey shrike perched aloft a lone tree branch or flush jack snipe in the wetter areas.

There is something magical about misty or cold mornings on the moors, but how much longer can we enjoy that undisturbed quintessential stroll beloved of walkers and naturalists alike?

Thorne Moors has seen many battles over the decades to secure and safeguard the fragile and sensitive ecosystem which exists across the vast expanse of wilderness. It has been that enigmatic almost magical essence which is not easily conveyed to the uninitiated, but once bitten remains ever present and is a salve for the soul.

The likes of Wm Bunting fought to secure access for local people, Stephen Warburton elevated our moors to national cause celebres in 1997 when English Nature sought to remove much of their protective status.

Local people now are questioning Natural England’s plan to Dedicate the National Nature Reserve as Open Access areas under the Countryside and Rights of Way Act. At first glance it sounds like a good idea, and Thorne & Hatfield Moors Conservation Forum are not opposed to the idea in principle. However, close scrutiny of the process thus far undertaken by Natural England has been found lacking in open transparency. The only consultation being conducted appears to have been with their own organisational staff, there has been neither public involvement nor consultation with knowledgeable interest groups or stakeholders. Senior Directors in NE appear to have rewritten the appropriate assessment process in order to avoid compliance with, or at the very least to side step the requirements of the Habitats Directive legislation.

Is it right that the proponents of this project are ‘judge and jury’ in terms of “likely significant effect” on the special interest features of the Natura 2000 site? National Nature Reserves are, according to Natural England “the best examples of their [habitat] type”, their website proclaims A National Nature Reserve (NNR) is one of the finest sites in England for wildlife and/or geology. So why are they being put at risk without a full assessment involving all available science and all stakeholders? Already there have been attacks on visitors by dogs off leads. Thorne Moors can to the uninitiated, be a dangerous place as there are many very deep canals and drains.

Are those of us with thirty or forty years experience sufficiently qualified to question statute? Should democracy have a voice and do local people count? For more details of the issues, see http://you.38degrees.org.uk/petitions/stop-rethink-national-nature-reserves-as-open-access