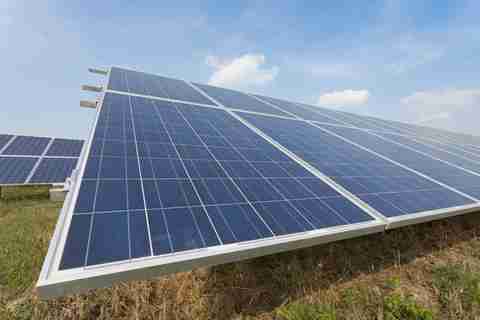 British renewable energy company RES has submitted a planning application to Doncaster Council to install solar panels on the former Thorne Colliery site to the east of Moorends.

If consented, RES say Thorne Colliery Solar Farm would be capable of producing renewable electricity equivalent to meet the average needs of approximately 1,500 homes a year.

Eliot Davies, RES’ Project Manager for the Thorne Solar Farm proposal, commented: “This application is the result of thorough and extensive environmental assessments of the site and the surrounding area. Based on the results of our investigations, we believe the former Thorne Colliery site offers an excellent opportunity to generate renewable electricity using the power of the sun, continuing the tradition of using this land as an important source of energy.

“Should the project receive consent, not only will this well-designed asset bring associated community and economic benefits, the solar panels will provide a homegrown source of renewable electricity; lowering our carbon footprint and reducing our reliance on foreign imports – which in turn helps to keep energy prices down in the longer term.”

The planning application follows a period of consultation with local people, which included an exhibition at Moorends in April 2014. Having had the opportunity to view the plans and ask RES questions, RES say more than two thirds (68%) of those who left feedback were supportive of the proposed solar farm.

Eliot Davies concluded: “Our pre-application consultation has been invaluable in understanding the opinions of local residents and key stakeholders. The feedback has been very encouraging, and we have responded to issues raised by local people in developing the final application: for example, in the level of security proposed at the site and the habitat management measures we will adopt to protect local wildlife. We hope the views of local people in supporting the scheme will be reflected in the project receiving a positive local decision.”

As the Local Planning Authority, Doncaster Council will now lead a period of consultation during which people will have an opportunity to view the formal plans and comment on them.

The planning application, reference 14/01554/FULM, can be viewed online at: www.doncaster.gov.uk/planningapplicationsonline

A decision on the application is expected by the end of 2014. RES say If consented, Thorne Colliery Solar Farm could be generating “clean, green energy and delivering community benefits” by autumn 2015.