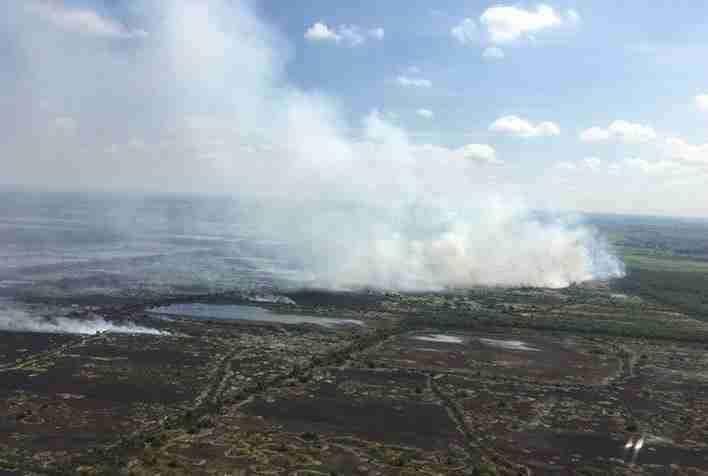 Firefighters are continuing to tackle a large blaze on Hatfield Moors and are now into their fifth day at the incident.

South Yorkshire Fire and Rescue Service were first to attend the incident on the moorland which was initially reported at 5:35pm on Sunday 17 May. Pumps have attended from across the entire South Yorkshire service with help also coming from West Yorkshire and Humberside.

A spokesperson for South Yorkshire Fire and Rescue Service said: “Currently we have five fire engines there at the moment and firefighters are continuing to fight the fires using beaters and water backpacks. We’ve got a drone in use, too, which is helping identify hot spots that need to be taken care of.”

They added that it would be “difficult” to say exactly how long the fire may last but do expect to remain at the moors for “some days to come”.

Drone footage from West Yorkshire Fire and Rescue Service posted online on Tuesday (19 May) showed the extent of the fire:

Our firefighters have spent more than 4️⃣8️⃣ hours now tackling a moorland fire at Hatfield Moors in Doncaster.

This drone footage from @WYFRS brilliantly illustrates the scale of the incident and has been used by our officers to help formulate a plan for tackling the blaze. pic.twitter.com/AFiB8FlQWw

South Yorkshire Fire and Rescue Service has also asked people not to visit the area following reports of people out walking on the moors: “The whole area is the site of an operational incident, please just stay away”, said a spokesperson.

Hatfield Moors are some 3,500 acres in size and – along with Thorne, Goole, and Crowle Moors – form part of the Humberhead Peatlands. The moors are seen as being ‘internationally important’ and are designated as a Site of Special Scientific Interest (SSSI).

Helen Kirk, Executive Secretary for the Thorne and Hatfield Moors Conservation Forum, expressed her concern for the moors’ wildlife saying: “The devastation on site is heartbreaking. The moors are home to an incredible amount of rare species and species like the adder are already under stress”. She is hoping to further assess the damage over the coming days. Helen also added praise for the fire crews for their “valiant efforts” in tackling the blaze.

A Roe Deer fawn has been passed to the RSPCA after it was rescued by firefighters from Humberside. A spokesperson for the RSPCA said: “It was in a bad way but the crew gave oxygen and managed to revive it.”

South Yorkshire Fire and Rescue says a ‘definitive’ cause of the fire has not yet been established. “Focus will turn to this most likely when the fire is out”, said a spokesperson.

Smoke from the fire extended to the Thorne and Moorends area yesterday (Weds 20 May) and affected householders have been advised to keep doors and windows shut.