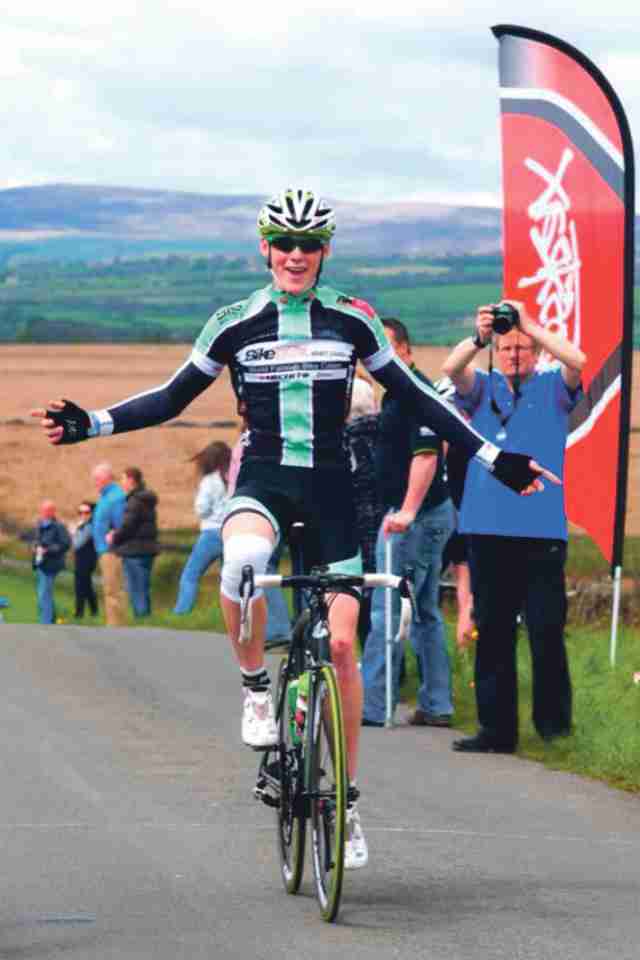 Connor Swift (Bike Box Alan/Whiston Wheelers) was a cut above the others in the Junior race. The South Yorkshire youngster was aggressive throughout, continually attacking and testing the ability of his race companions.
Connor Swift had broken clear with Vet rider Peter Fielding-Smith (Wilson Wheels), and Paul Dixon (VS Cycles) chasing. But on the final lap for the Juniors Swift was up against the might of the Sportscover team riders Jake Womersley and Oliver Wood. As they appeared on the final climb Swift had the measure of the Sportscovers and easily took the win.
1. Connor Swift – Bike Box Alan Whiston Velo

3. Oliver Wood – Sportscover
It was warm and dry for a change in the lanes
around Borough Bridge today for Clifton’s afternoon race. Fifty eight riders took to the start lane which was led out of Aldborough village on to the famous Milby circuit where the riders weren’t going to hang about.

The speed was fast and they were soon doing 50mph for five miles, the narrow roads made for the odd attacks but they were soon brought back not gaining more than twelve seconds.
With strong teams wanting a bunch sprint, none of the breaks were sticking and counter attacks were fast and furious only to be dragged back again. The strong wind didn’t help for breakaways.
With two laps to go Steve Coates (We Love
Mountains) and Richard Moore (Squadra RT) gained twenty two seconds, however Dirtwheels riders weren’t letting this go and brought them back on the final lap.
The average speed was 26mph in windy conditions so they weren’t hanging around.

The last lap the odd rider(s) tried to get away and eventually the elastic was broken with Connor Swift (Bike box Alan) attacking with Andy Shaw (Out of the Saddle). This was the decisive move and they were joined by Mike Marshall (Dirtwheels) with Swift taking the victory.
The Group A race was marred by a crash at around half distance resulting in 2 riders having to go to hospital. With 3 laps to go, James Baillie (Langsett Cycles RT) & Connor Swift (Bikeboxalan) opened up a 40 second gap which they extended to 50 seconds a lap later. At the bell, the leading duo still held a sizeable lead of 31 seconds over a chasing group comprising Jamie Burgan (Langsett Cycles RT), Ashley Proctor (Bikeboxalan) & Andrew Shaw (Out Of The Saddle CC) with Dan Lowthorpe (Langsett Cycles RT) a further 12 seconds back trying to get across to the chasing group. The bunch were now over a minute behind the leaders.

At the finish, Swift easily won the sprint from Baillie, Burgan took 3rd place, 25 seconds behind, ahead of Shaw in 4th & Proctor in 5th with Lowthorpe taking 6th a further half minute back. Joey Walker (RST Racing Team) attacked the bunch to take 7th place with team-mate Struan McInnes winning the bunch sprint for 8th place, just under one and a half minutes down on Swift.

Keep a close eye on this youngster with his prospects more than favourable of another great racing season ahead. We will be bringing you Connor’s news and updates every month.