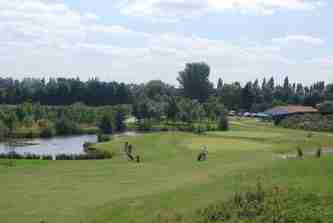 Muirfield, home of The Honourable Company of Edinburgh Golfers, became embroiled in controversy earlier this year as it hosted golf’s premier tournament – The Open Championship. Though women are able to play the course, they can do so only as guests or visitors of a fully fledged member as the Club does not allow females membership in their own right. Criticism centered on the notion of how a Golf Club could be allowed to stage an ‘Open’ tournament when insisting upon such archaic rules so out of sync with modern culture.

Since opening in 1995, Kingswood Golf Centre, located on Thorne Road between Hatfield and Thorne, has refused to play up to the sports stereotype and become bogged down with its ‘stuffy’ elitist image. The result has been to create a friendly, relaxed atmosphere very much at odds with that typical of most Golf Clubs. With an open door policy and no strict dress code the centre has attracted budding golfers of all abilities and ages.

At this stage I should point out that I have, for many years, engaged in a love-hate relationship with Golf. I’ve been lucky enough to play on some stunning courses around the world and despite my devotion to the sport I have had to concede that, as I approach my 40’s, I will never be the next Tiger Woods. Ever. However, hope is not completely lost amongst the Whitehead clan as I still harbor high hopes that my two boys, Charlie and James, will become Sporting superstars in their own right.

At the invitation of the owner, Chris Mann, I visited Kingswood recently, for the boys to participate in their very first golf lesson as part of the Junior Academy programme which aims to give children as young as four years old the opportunity to learn how to play and, hopefully, progress them to the point of achieving their own handicap score.

Upon entering the Centre it is immediately apparent that this is not your typical golfing establishment. Most golf clubs can create a rather daunting atmosphere with a resemblance not dissimilar to an old public school hallway. Old wooden boards containing name after name of previous club champions and portraits of Club captains, in some cases, dating back centuries. It was very refreshing to see nothing of the sort at Kingswood with its simple, yet stylish, open plan clubhouse. No champions boards, no large trophy cabinets and no portraits of ‘Lord Percy Somethingorother’, Club Captain, 1852-1853.

The Academy lessons take place at the Driving Range located just behind the clubhouse and have been running now for five years. The lessons are conducted by one of the three resident club professionals. Nick Hodkin, who has worked at the centre for three years, would be conducting the lesson. I was a little nervous beforehand as to how the boys might feel as this was pretty much the first time they had swung a golf club in any capacity and, of the nine children taking part, they looked the youngest and least experienced.

Any misgivings I had were quickly put to rest as Nick immediately got all the kids involved in some light, fun, warming up exercises before getting them straight into it and letting them hit some balls down the range. Once they’d let off some steam, Nick did some tutoring on how to properly grip the golf club and what to watch out for during the different stages of the swing before it was back to hitting some balls. This was followed by a competition to see whether any of the kids could get close to a particular net target on the range before finishing the lesson with some putting tutelage and another competition to see whether anyone could put their ball into a basket. 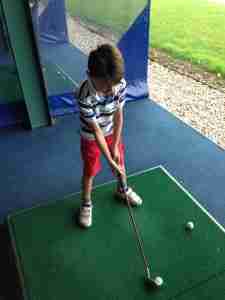 Each lesson is one hour in duration which, in this case, literally flew by, leaving the juices flowing and the boys wanting more. A very successful first venture into the world of golf for Charlie and James.

As with most parents, we’re constantly grappling with our childrens attention span, however, what was most impressive about Nick’s tutoring was how he got all the children involved and hitting balls almost immediately – hence satisfying their desire once they had a club in their hands. The last thing a child needs is to have to listen and focus for too long when all they want to do is ‘have a go’. I was also pleasantly surprised when, at the end of the lesson, Nick informed me that the other children in the group were quite advanced as, due to the relaxed way he approached the lesson, Charlie and James certainly were not made to feel out of their depth.

The basic rules of golf – to get the ball in the hole – don’t alter regardless of how good you are. It simply takes some longer than others to achieve this aim. Since its introduction, the Academy has proved extremely popular at Kingswood. Through the course of a week there are 120 attendees at different stages in their development, from ages 4-16, with the aim of achieving a handicap score typically over an eighteen month period. A four week course costs GBP28 for four lessons and is run throughout the year.

The fact Kingswood is known as a golf ‘centre’ and not ‘Club’ says everything about the reputation it is keen to promote – everyone is welcome. Overall we found the experience very enjoyable. The golfing facilities provide everything you would need. We will definitely visit again and who knows, for either Charlie or James, perhaps it’s the start of a beautiful relationship…..