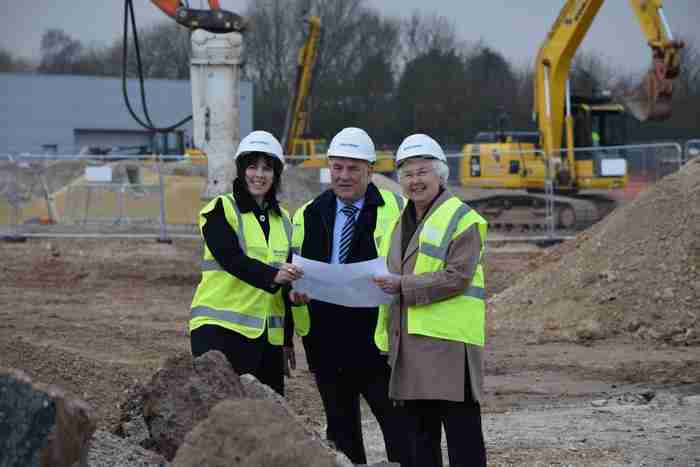 Potential Jobs Boost on the Horizon as Construction Work Begins

Henry Boot Developments have started the construction of new industrial/warehouse units at their Thorne Park development, off Omega Boulevard in Thorne.

It is hoped that, once finished, the development will bring new business to the area, creating further jobs and boosting the local economy.

Henry Boot recently secured a £6.45 million grant from the European Regional Development Fund (ERDF) to enable delivery of this final phase, and has confirmed that units will be available for occupation as soon as summer this year, with scheme completion due by September.

The industrial and warehouse units will be joined by two drive through restaurants, new food & non-food retailers, and a petrol filling station in the coming months. Work on a Marston’s pub is already well under way.

Vivienne Clements, director of Henry Boot Developments Limited met with the Mayor of Doncaster Ros Jones and Cllr Joe Blackham to commemorate the start on site.

She said, “We are pleased to move forward with speculative development to provide high quality industrial space at Thorne Park. We are seeing an encouraging level of market demand in the scheme and feel confident that the business park will be fully occupied by local and regional businesses very soon.”

Mayor of Doncaster, Ros Jones, said: “It is great to see construction getting underway at Henry Boot Development’s business park scheme at Thorne Park. This development reflects growing confidence in Doncaster’s economy, and this new investment will help us on our drive to fuel further jobs and growth across the borough.”