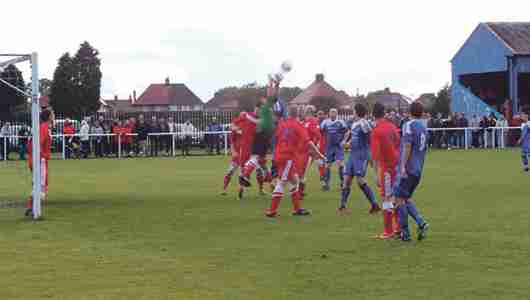 September 9th 2013 marked the one year anniversary of the death of Sgt Lee Davidson, who was killed when his vehicle hit a road side bomb whilst serving in Afghanistan. Best friend and colleague Scott Mallen wanted to do something to mark the occasion so decided to do a memorial football match in memory of his friend.

After a few heavy downpours Thorne colliery FC & the Light Dragoons entered the field with Sgt Lee Davidson’s two sons leading them on holding both match balls.  Both teams then exchanged handshakes before making their way to the centre circle for a minutes silence which ended with an applaud from the large crowd who came to show their respects.

The game started at a frantic pace from both sides, but it was the Dragoons who looked the more eager, putting in some strong and crunching tackles.  Thorne colliery didn’t react to this and started passing the ball around to great effect, which enabled them to create a couple of good chances. It paid off when Atkinson put the ball into Frosts path and he finished with ease to make it 1-0 to Colliery in the 12th minute.

The Dragoons responded straight away with a long ball over the defence and as the rushing keeper came out the ball zipped by him with the wet surface and the Dragoons striker put the ball into the empty net 1-1.

Colliery then started to take the game to the Dragoons creating chance after chance with some good pass and move football.  A cross from Ebbage found Frost at the far post to head colliery 2-1 up.

Frost was causing the opposition plenty of problems with his pace and ran by 3 players to square the ball across goal were Ebbage and Turkhud were waiting to pounce, Ebbage fired the ball into the bottom left corner to make it 3-1 to colliery at half time.

The second half started as the first ended with Colliery making numerous chances and it was Frost again racing through on goal to score his hatrick and make it 4-1.

Numerous substitutions were made by both sides and this seemed to give the Dragoons a great chance to get back into the game, which they did when a corner came over and the keeper couldn’t hold onto it and the ball bundled over the line 4-2.

Straight from the restart colliery pushed forward and good play from the left side saw Smiggy lace the ball into the top right hand corner, making the score on the final whistle 5-2.

Scott would like to thank everyone for coming and a special thank you to Tony Stroud and Thorne Colliery, best wishes for the season.

All in all a great evenings football for a great cause raising £…. for the charity close to the Davidson family, Scotty’s little soldiers, and an excellent tribute in honour of Sgt Lee Davidson.