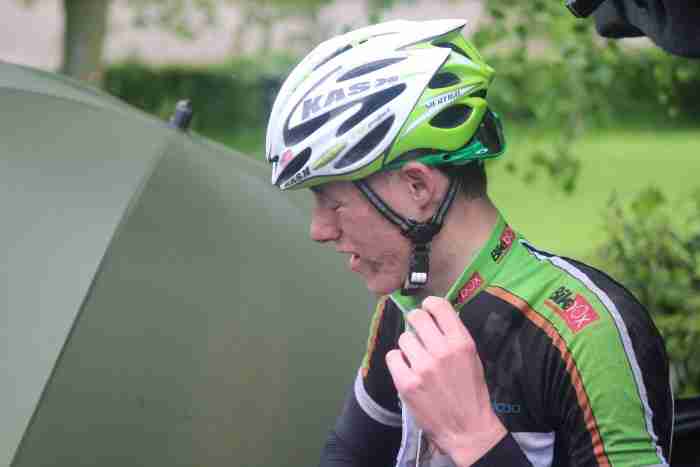 Competing in the Lincoln Grand Prix, the third round of the British Cycling Elite Road Series, Thorne’s Connor Swift experienced racing against the best this country has to offer.

The Lincoln GP is the longest race on the Elite calendar. It’s also one of the toughest with 125 miles of rolling roads and some very steep climbs. The course consists of two large circuits around Lincolnshire, through villages and small narrow roads, and then eight smaller laps around Lincoln city centre, which includes St Michael’s Gate, an infamous steep cobbled hill.

Rain the previous night had took it’s toll on the roads and with many riders fighting for their place, racing through the narrow country lanes was proving treacherous. Just 3 miles into the race the first major crash occured resulting in some riders having to go to hospital, and a couple of the bikes, including a team Raleigh bike, were broken in half due to the impact.

Following further crashes some riders pulled out of the race as they felt it was proving too dangerous for them continue.

After being caught up in several of the crashes Connor was constantly chasing and trying to catch the groups in front. Unfortunately this was to no avail and eventually had to pull out of the race during the laps around Lincoln city centre. The experience was still worthwhile for Connor, and he can be pleased with his performance as the 18 year old prospect had seen some big names fall before him, including five times World Champion and Olympic Gold medallist Ed Clancy.

Out of 171 riders on the start list, only 41 riders completed the gruelling course. The pace was quick from the start, as shown by Connor’s race computer, with an average speed of 43.1 km/h and a max speed of 70.5km/h.