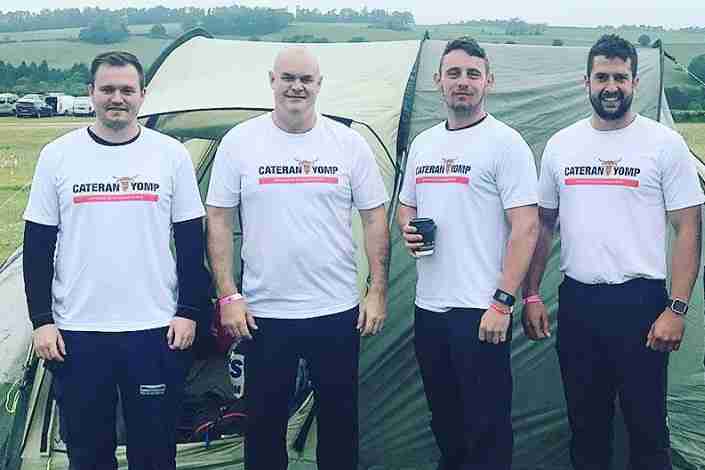 A group of men are raising money to help soldiers and veterans by taking part in the ‘ultimate charity walk’.

The Cateran Yomp is said to be one of the toughest and biggest events of its kind, taking place on the 9th and 10th of June in the foothills of the Cairngorm Mountains in Scotland.

Those taking up the challenge from ‘Team Thorne’ are; Tom Stewart, Ian Stewart, Greg Linsdell, team captain Steve Baggott (all pictured) along with Craig Smith.

The five men will attempt to march fifty-four miles in 24 hours across the rugged terrain of the Scottish wilderness.

To train for the event, the men have been circuit training, running around 10 to 15 miles at a time and also walking with weights on their backs. Team Thorne member, Greg Linsdell, said, “I don’t think there’s any way to be ready, and last year when we did it myself and Steve Baggott were the only ones to complete it.”

Gregg completed the walk last year in 21 hours 30 minutes, coming 165th out of 3,000 entrants and is hoping that this year he will beat that to achieve his personal best.

The Yomp, a military term for a long distance march, looks to raise vital funds to support soldiers, veterans and their families. Each ‘yomper’ is asked to commit to raising £400 in sponsorship, with funds going to ABF The Soldiers’ Charity.

In seven years the Yomp has raised an incredible £2,900,000 for ABF The Soldiers Charity, who give a lifetime of support to soldiers and veterans from the British Army, and their immediate families, when they are in need. They make grants to individuals through their Regiments and Corps and support a wide range of specialist charities that sustain the British Army ‘family’, both at home and around the world.

The cause is important to the group as Greg, Craig and Ian were all in the forces, and they want to raise money for the charity to help those soldiers who are struggling with issues such as PTSD.

Greg has so far raised £450 for the charity, and in total the team has raised over £3,000 both online and offline. Greg continues, “The aim was to get roughly £3,000 and we’ve just got over that now and my personal target was to raise £500 which I’ve almost completed.”

Should you wish to donate to the cause and support Team Thorne, you can donate HERE