Thorne firefighters have rescued a bull that was stranded in a ditch next to a field in Thorne.

The bull was reported to be waist deep in water near Sandtoft Road at around 2pm on Thursday (13 March).

Firefighters worked with the farmer to create a ramp, then used animal rescue gear to usher the bull to safety.

Sandtoft Road was closed whilst the bull was moved to the safety of a secure field, with firefighters coming away from the incident at around 4pm. 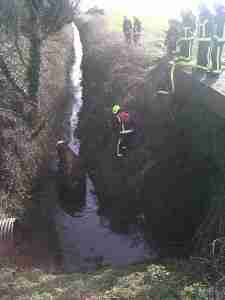 Station Manager Shayne Tottie said: “The animal was quite calm to begin with, but became more distressed as the rescue went on. Luckily, it responded to our efforts to get it to safety and now the bull and the farmer are both happy. It’s certainly one of the more unusual, and more frightening, animals we’ve been called to rescue!”