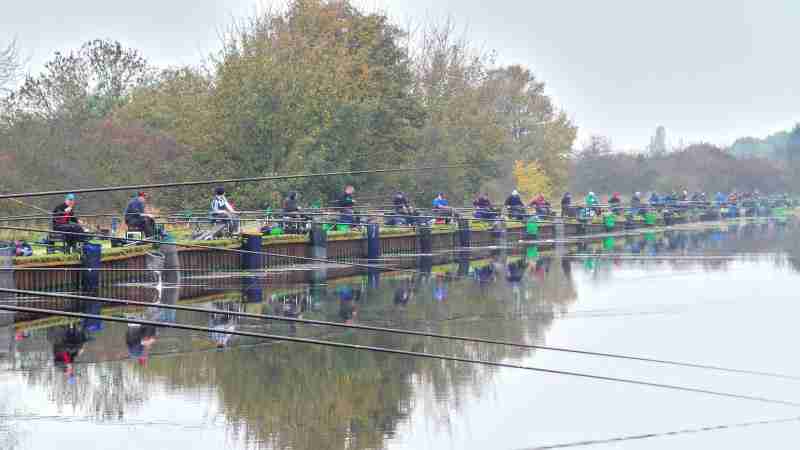 Frenzee and Bait-Tech backed ace Steve Barraclough won round five of the 75 strong Thorne Teams Of Three Winter League, with a cracking 16-3-8 net of roach.

Drawn on peg 231 on the Scrub Field section of the Stainforth & Keadby Canal at Thorne, Steve caught over 150 roach on bloodworm and joker tactics to secure the win.

In the team stakes, it was league leaders, Ultimate Barnsley who once again romped to victory on the day with a 38-8-0 net – further reinforcing there place at the top of the table.

With just three fixtures of the eight round league remaining, the race for individual glory is wide open. Pole Fishing magazine’s Matt Godfrey leads the charge, with four out of a possible five section wins – but with two results dropped, there are 11 anglers who could still potentially finish with minimum penalty points.

The following people could all still finish with minimum points:

Andy took victory in the Mosella Selby Teams of Three League in harsh conditions with a superb 9lb 2oz catch of mainly roach on bloodworm from Peg 180. His teammate, Simon Fields, pushed him close, finishing second with 8lb 6oz.

The following day saw the prestigious Thorne Teams of Three League also take place on the canal, where a strong field of 63 anglers battled it out.

In more favourable conditions with the wind off his back, Andy found himself on Peg 176 – just four swims away from where he won the previous day. Making a brave decision, Andy opted to fish very differently with casters at 16 metres. Here, he found skimmers to 2lb, as well as some hybrids and chunky roach, finishing with 13lb 1oz to take another match win!

Said Andy: “I didn’t really fancy the peg on Saturday, so I decided to keep my head down and put small fish in the net. In the bad wind, anglers struggled to fish long poles where the bigger fish are often caught, and thankfully my bloodworm attack paid off!

“On the Sunday, however, the wind had dropped and I knew I needed to catch some bigger fish to compete. By feeding sparingly with a catapult, and fishing a light strung-out rig at 16 metres, I managed to tempt some skimmers and beat the bloodworm anglers. Better still, my team consisting of James Dent, Dave Brooks Junior and myself are winning the league, so fingers crossed we can keep it up!”

Andy finished just an ounce ahead of second-placed Thorne angler, John Freeborn, who took exactly 13lb of quality roach on hempseed from Peg 204. Third place went to Welsh International, Ben Roberts. He managed a fine net of small roach, along with a surprise 2lb tench on double joker for his 12lb 14oz total.