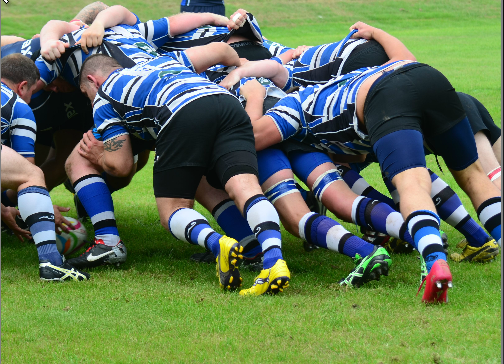 Officially the first game of the season was the 17th August, however, for the grizzled, old-fashioned, rugby aficionados among us the season doesn’t start until the wind and the rain make their first appearance and they duly took their bow here as the elements howled around the Coulman Road cauldron to welcome the undefeated Old Modernians.

Prior to kick-off the Club held its second pre-match lunch of the season which was extremely well attended. A fabulous meal was capped off with a rousing rendition of ‘Bless You (for being an angel)’ by treasured Club stalwart and former President, Mr Doug King, who at 92 years of age showed he could still hold a tune and grab an audience – well done, sir. With the crowd suitably upbeat, despite the weather, the players took to the field to commence battle with the tough tackling Old Modernians. This was a true blood and thunder encounter with no quarter given.  Faint hearts were duly advised to stay at home.

Old Modernians made the swifter more effective start and with Thornensians hooker, Robert Russell, taken off with a blood substitution after four minutes, the home side had to soak up the early hits as well as the pressure. Russell duly returned complete with skull cap – epitomizing his teams desire to stand up to the physical challenge.

Finally the early pressure told and after a fine break from the two centres, Old Modernians were awarded a penalty within range of the posts which they duly kicked to take a three-nil lead. Further pressure was exerted on the home side with Old Mods gaining a turn over at a scrum on seven minutes. The home side were definitely on the back foot.

Following a period of scrappy play, the first signs of a Thornensian fight back came with swift play and quick thinking from No9, Lee Lindsell, resulting in centre Oliie Cox just denied a try in the corner. However the home side’s momentum would be halted on 22 minutes following a serious leg injury to second row, Robert Raper. The teams retreated from the field to allow medical staff from both sides to attend to the stricken player who was eventually stretchered from the field to loud and courteous applause from the home crowd.

Many teams could have allowed such a serious injury for one of their own to cloud their thinking and performance. But these are Thorne boys and made of strong stuff. As if stung into action following the loss of their team mate, the home side came flying out of the traps from the re-start and within a minute they had crossed the white wash for the games first try. Clever play from the back of a scrum by No8, Robert Moffatt, created space for Ollie Cox who duly returned the favour, and the pass, for Moffatt to touch down. With a missed conversion this made it 5-3 to Thornensians.

The remainder of the first half saw the home side continue their relentless pressure resulting in two successfully converted penalties by kicker Ollie Cox, the latter following a crunching hit by No10 Luke Marsden on Old Mods No 13 bringing not only the points but a huge roar from the crowd. Half-time 11-3 to Thornensians.

At the start of the second half, the home side picked up exactly where they left off in the first with wave after wave of pressure. A fantastic break between Ollie Cox and Brett Hunt resulted in a lineout on Old Modernians try line. Smart work between Robert Russell and No 4, Andy Evans, resulted in the hooker going over for a try on 50 minutes. With a successful conversion by Ollie Cox the score was now 18-3 in the home sides favour.

By this time Thornensians were completely on top and forcing Old Modernians into countless mistakes and unforced errors to hand back the initiative. Almost all the action, for the first 25 minutes of the second half, took place in the away sides half. A rare misunderstanding between Brett Hunt and full-back, Jarrard Jones, resulted in a Modernians scrum on the home sides try line. Modernians managed to cross the line but great defense from Thornensians made sure they were held up – no try.

With Thorne managing to clear their lines they forced a further converted penalty making the score 21-3. In the 77th minute Old Modernians, proud of their undefeated record, managed one late surge to go over the line for a try to make the score 21-8. However the fight back had come too late and the home side ran out convincing victors. Such performances will ensure their goal of promotion remains firmly on track.

Second row forward Robert Raper suffered a double ankle fracture and dislocation. He also suffered ligament damage.  Robert is a young, talented rugby player starting his first season in the 1st team. This was a win for him. All at Thornensians and Thorne Times wish him a speedy recovery. Best of luck, Rob.