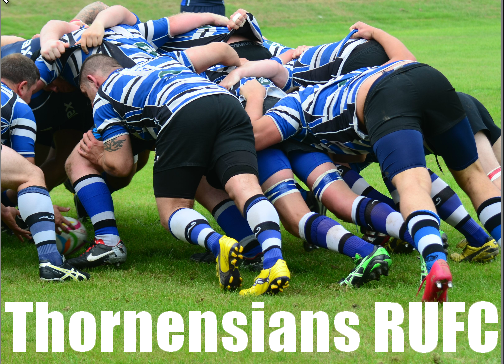 Thornensians end of season round up

Thornensians managed to finish the season with a lovely trophy for their cabinet, a busy last pre-match luncheon for the final home league game of the season also saw a terrific match against local rivals and newly-crowned league champions, Goole and old friends said goodbye to a cherished club stalwart.

Having come through previous rounds with flying colours, defeating Barnsley and Doncaster Phoenix, Thornensians faced Wath to decide who would take the honours in the reformed Uniplex Cup. 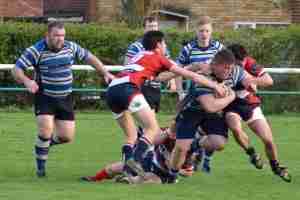 A packed crowd gathered at Coulman Road with Wath also bringing along a strong, vocal travelling support. The home team would welcome back both second row forwards, Andy Evans and Rob Raper, following serious injuries earlier in the season. Evans would make an immediate impact with the first try of the match to give Thorne a 5-0 lead. Wath quickly responded with a try of their own and the first half ended with the teams locked in a stalemate at 5-5.

The second half saw the home team begin turning the screw with solid scrumagging and driving from the forward pack. With ten minutes gone, the pressure eventually told. Following a line out the forwards produced a terrific drive and maul to take No8, Ryan Pilley, over for the first try of the half. With the wind wreaking havoc with both teams kicking game, the conversion was missed leaving Thorne 10-5 to the good.

The trophy now within touching distance, straight from the kick-off, Andy Evans and Aaron Holt combined to storm down field. More slick passing saw No9, Luke Marsden, burst through to score under the posts. This time the conversion was made to put Thorne in an unassailable 17-5 lead.

More great work from the backs would see No15, Zak Holgate, score in the corner to put the result beyond doubt. Wath hadn’t made it to the final by chance and continued to push for at least a consolation score, which they did with some good work from their right-winger to score in the corner. A missed conversion saw the referee blow his whistle and bring the curtain down on a terrific victory for Thornensians, 22-10.

As the players were presented with the trophy the crowd got right behind their team. A wonderful way to finish the season.

The final home league game of the season saw local rivals, Goole, visit Coulman Road. With the league places already decided and Goole confirmed as champions there was just the small matter of local pride at stake. That was all the teams needed to produce an absolute barnstorming exhibition of solid, hard tackling, slick rugby for an appreciative (and typically large) crowd.

The first half would see four tries and one penalty conversion to see the away team with a slender 15-10 lead. Both teams were steaming into the breakdowns and tackling as though their lives depended on it. 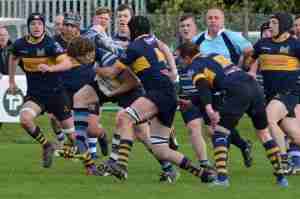 Hughes crashing over for a try

The second half saw Goole stretch their lead even further. Despite great pressure from Thorne one pass too many lead to an interception and a try beneath the posts for the away teams No13. The massively vocal home crowd got behind their team for one last surge at the end of the season and they got their reward. A wonderful piece of flowing rugby and great work from Brett Hunt saw Lee Lindsdell burst through to score under the posts to bring Thorne within five points of their opponents. 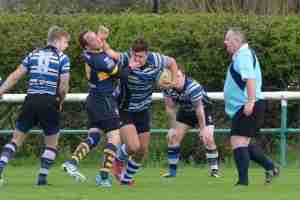 Pilley on the rampage

At this point emotions began to boil over and both teams saw a man sin binned for letting their fists get the better of them. The game now began to open up and following another great burst from Hunt allowed Aaron Holt to score under the posts. With the conversion the home team were now in the lead 24-22 and local bragging rights beckoned.

Credit to Goole who showed why they were champions and came storming back into the match as Thorne, after such a super human effort, began to tire. A great try from a lineout on half way put Goole back in the lead which they extended with a penalty kick on full-time to leave the final score 24-32. A wonderful match from two hugely committed teams.

A lunch for Pete Watson

It was my honour to represent Thorne Times at a recent lunch hosted by Thornensians RUFC in memory of Pete Watson who sadly passed away last year. In attendance were Pete’s family and friends from various areas of his life.

Pete came from a fine rugby background with strong connections to Leicester Tigers and Thornensians. The lunch was extremely well attended and was ample evidence of how well respected and popular Pete was. He was tireless in his efforts to assist the Club with various fund raising initiatives and was a key instigator of the Sportsman’s Dinners, which thanks to Pete have become hugely popular events.

The meal was followed by various attendees recounting their personal memories of Pete. Brain Willis, Club President, who knew Pete for forty years told numerous amusing anecdotes of their time together. John Taylor, a friend of Pete’s and fellow member of a local gym told a variety of their ‘keep-fit’ stories. And finally Pete’s wife, Sheila, proudly revealed the inaugural Pete Watson prize for “The Most Promising Young Player” to be awarded from next season onwards.