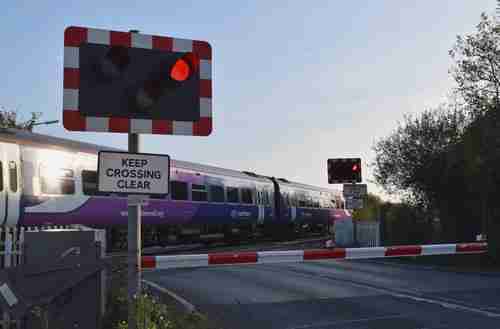 People who misuse railway crossings are being targeted by British Transport Police (BTP) as it attempts to reduce the thousands of cases it deals with each year.

BTP deal with incidents on a daily basis where pedestrians and motorists risk not only their lives, but those of rail passengers and staff by misusing crossings. 30 drivers a week receive penalties for crossing-breaches

This week (From Mon 29th) Operation Look will see BTP officers and colleagues from Network Rail carry out extra patrols across the country, including various locations in Doncaster.

Officers will talk to pedestrians and drivers about the dangers of crossing misuse. They will also visit schools, youth clubs and local businesses to warn people to use crossings safely.

While communicating the importance of proper level crossing use is vital, BTP is also committed to enforcement.

Between 1 April 2013 and 31 March 2014, 732 motorists were charged or summonsed for crossing misuse, with a further 740 issued with fixed penalty notices, and 102 cautioned for traffic offences.

A further 2,125 drivers were sent on safety-awareness courses. The vast majority completed the course, with very few going on to re-offend.

BTP is also determined to tackle pedestrian misuse of crossings and its recent campaign to warn against any trespass on the railway, Operation Intruder, involved education and extra patrols at crossings.

Inspector Peter Kooper said: “It is important people realise there is a serious penalty to pay for crossing-misuse. However, while we will not hesitate to use the force of the law, we are also acutely aware of the need to promote safety at crossings through education.

“We need drivers and pedestrians to realise level crossing misuse is a danger, not only to their safety, but the safety of others.

“We work closely with our partners at Network Rail, as well as colleagues across other police forces, to ensure crossings remain as safe as possible and will spend much of this week of action talking to people who use level crossings on a daily basis.”

Darren Furness, head of level crossings for Network Rail said: “Level crossings were built decades before our roads and railway became as busy as they are today and so we all have to deal with this unwanted legacy.

“While we’ve closed hundreds of crossings, road crossings are the most difficult to find an alternative solution for and so, with many, it’s about raising awareness of the consequences of taking unnecessary risks and working to keep the crossing operating smoothly and safely for everyone.

“We know waiting at a level crossing can be frustrating, but motorists who decide to jump the lights or try and weave around a barrier for the sake of a few minutes, risk at worst, their lives and the lives of others.

“They can also damage their vehicle by striking barriers and risk a hefty fine or points on their license, which for anyone driving for a living can mean losing their job. Surely that isn’t a risk worth taking?”

In line with recommendations from the Office of Rail Regulation, Network Rail is committed to closing crossings where possible and replacing them with alternatives, such as footbridges.

Some 800 level crossings have been closed in the last four years, but there are still more than 6,000 crossings on the rail network, and BTP is committed to ensuring they are as safe as possible.

During Operation Look, officers will carry out extra patrols at crossings. They will be joined by Special Constables, volunteers and Network Rail level crossing managers.