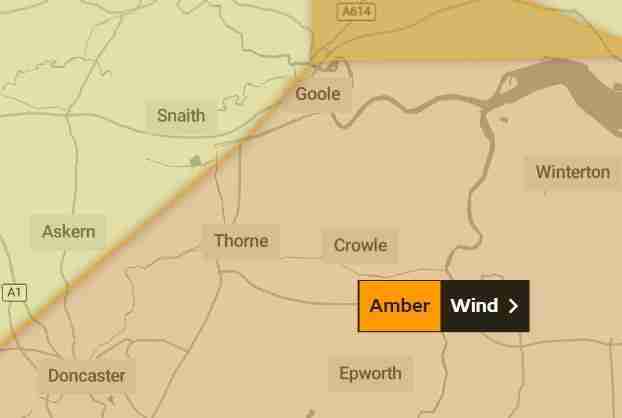 A weather warning issued by the Met Office for the Thorne area for Storm Eunice has been upgraded.

The national weather forecaster had initially issued a yellow warning for the storm which is due to arrive on Friday (18 Feb) but has since upgraded that to amber, saying the storm ‘may cause significant disruption due to extremely strong winds’.

The warning is in place for Friday 18 February, from 5am in the morning to 9pm in the evening.

Met office data for the Thorne area is forecasting gusts of wind of up to 63mph.

The Met Office says damage to buildings is “likely”, and power lines may be brought down.

The forecaster continues: “There is a good chance that power cuts, possibly prolonged, could occur, perhaps affecting other services, such as mobile phone coverage”.

The forecaster adds: “It is likely there will be falling branches and some uprooted trees”.

Some parts of the UK have been issued with a rare red warning which is the highest level. It is said that flying debris could result in a danger to life.