British Transport Police (BTP) officers want to speak to them after a bike was stolen from cycle racks in the car park of Doncaster Station.

The incident occurred at around 3.30pm on Thursday, 22 January.

Investigating officer PC Helen White said: “A man and a woman were standing in the cycle rack area looking towards a black mountain bike. A second man then appeared and chatted to the pair. He approached the bike, removed something from his pocket and cut the green lock which was securing the bike. He then left the cycle rack, taking the bike lock with him while the first man returned and removed the bike.” 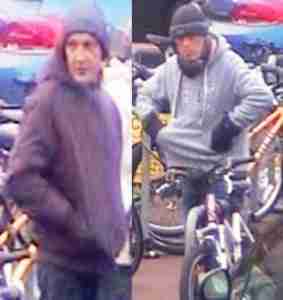 The bike is a black Bergamont Vetox 6.4 mountain bike with a blue and bright yellow trim.

PC White added: “We believe the men in the images could have vital information about the incident and ask them or anyone who recognises them to come forward to help us with our enquiries.”